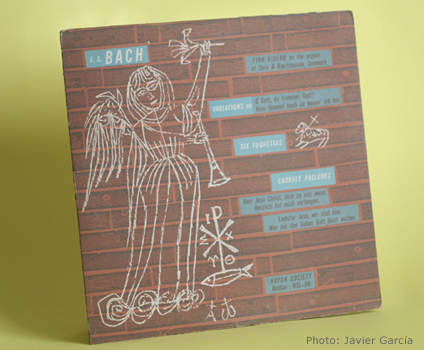 I will be posting a series of classical records from the Haydn Society/ Boston that I’ve been collecting. My last post from these series will be a surprise (I hope). It’s a record cover that blew me away.

I could not find much information on the design part of the Haydn Society but they seem to have hired top of the line designers for their record covers.

Joseph Low was an Illustrator who made cover illustrations for The New Yorker and is mostly know from the awards of his book “Mice Twice.” He also illustrated over a dozen children books, book jackets and record covers. I will be posting a few of the record covers here.

His style is very expressive, rich in texture and playful. He used a lot of rough brush strokes and wood and linoleum cuts. The bricks on the image above were probably either linoleum or wood cuts I think which added a very cool texture.

I also love the typography and how it interacts with the background.